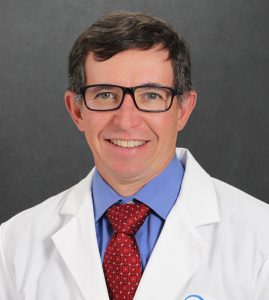 Dr. Earle, obtained a Bachelor of Science in Zoology from Arizona State University in 1986, and his MD from the University of Arizona in 1990. He completed his general surgical training at The State University of New York (SUNY) Health Science Center at Brooklyn in 1995, and fellowship training at the Institute of Minimally Invasive Surgery, a New York Medical College affiliate in 1997. He began his career as the Chief of Minimally Invasive Surgery at SUNY Brooklyn, and was rapidly recruited to Baystate Medical Center in Springfield, MA in 1998. During his 17 years in Springfield, Dr. Earle founded and directed a Minimally Invasive Surgical Fellowship, was Director of the Esophageal Physiology Laboratory, and served on the board of the Baystate Medical Education and Research Foundation. Dr. Earle is nationally and internationally recognized for research, device development, education, and clinical care. He has been involved in a variety of roles in national surgical societies, including Chairman of the Guidelines Committee of the Society of American Gastrointestinal and Endoscopic Surgeons (SAGES) and two terms as a Board Member of the Americas Hernia Society, and editorial board member for the Journal Hernia. He has been a longstanding Fellow of the American College of Surgeons, Diplomat of the American Board of Surgery, and member of the Massachusetts Medical Society. He has been involved in hundreds of peer reviewed scientific and clinical journal articles, scientific meeting presentations, invited lectures, and faculty for surgeon courses around the globe. He has written over a dozen book chapters in the field of minimally invasive surgery and hernia repair, and recently co-edited a textbook of Natural Orifice Surgery. He is also on the editorial advisory board of the popular General Surgery News publication, distributed to every general surgeon in the United States.

His interest in surgical education has taken him to the far reaches of the globe, with substantial volunteer surgical experience and education on five continents. In 2017, he spent a year working for the United States Food and Drug Administration (FDA) as a medical office in the Division of Surgical Devices, focusing on robotic assisted surgical devices. He completed his tenure as Chief Medical Officer for the healthcare analytics company Surgical Momentum, which reorganized to the newly founded CQ Insights, and is the Western Massachusetts Regional Medical Advisor for the National Ski Patrol.

Dr. Earle founded the New England Hernia Center as a private practice, specifically to allow him the ability to practice quality over quantity, a concept increasingly impeded in large medical centers. He serves as a regional referral source for hernia disease. His clinical practice has been focused on hernia disease since 1996, and emphasizes a patient focused approach, centered on the principle of establishing and aligning the goals of the individual patient with the health care team.
His hobbies include spending time with family, mountaineering, mountain biking, snowboarding, photography, and playing guitar.

+ Back to About Us